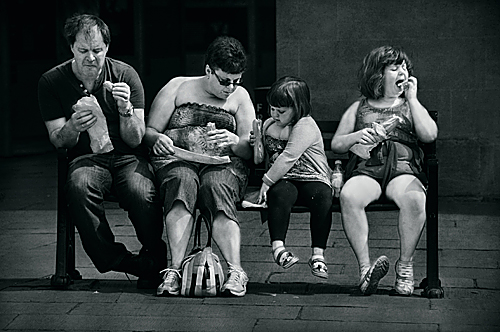 This image [colour version – follow link below ] has provoked quite an extraordinary response on my Flickr stream these past few days. The responses have ranged from the flippant to the thoughtful, from the concise to the lengthy reflection, in public and an unusually bulky private message Inbox.

As someone wrote publicly: “Street documentary is a controversial subject. I agree with whomever it was that wrote that it is here to provoke an emotion. Which emotion that is is individual but the job of the photographer is to present the image so that it is felt by the viewer.”

And another message privately: “…[I like photos that] provoke discussion …it’s a chance for people to hear themselves think.”