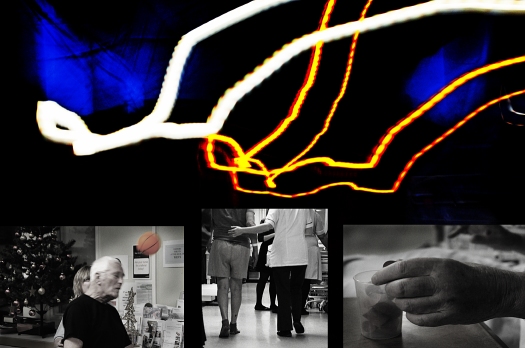 The brain is an extraordinary thing. And to witness its innate ability to rewire only adds to its weird and wonderful aura. But along with the brain, comes the mind. And with it, the real challenge begins.

The images here quite clearly illustrate the brain’s remarkable, largely autonomic, rewiring capacity. In just two short weeks; from a starting point of complete paralysis of his left side, dad can now walk, head [and catch] a ball, and the hardest thing of all: pick up and place small plugs into a cup. [If you look at the right hand image, you can see the tension in his background right hand. He also lifts his left leg too, such is the effort involved in that task. The complex mechanisms of the hand are notoriously the slowest to respond, and require the most ongoing work.]

All this has been incredible to see. And, removing all the wishes and hopes from the equation, it’s honestly the last thing my step-mum and I had expected in this time frame. But now, there’s a new hurdle on the track… his mind.

A couple of days ago we had a meeting with the entire stroke team [doctors, nurses and physios], every one of them remarking on his exceptional progress. The mood was buoyant. And finally suggesting, at this rate of improvement, he could be home in a week; something which seemed completely incomprehensible not much more than a week ago. And there sat dad, silent, distant. All perspective seemingly lost. To him, that week sounded like a month, a year!

It had been creeping in for a couple of days now. The gentle humour receding, the anxiety and the grumpy emerging. I say, emerging, but in reality, re-emerging. It was partly where the idea for the journal came from, sensing this part of the challenge that lay ahead of him; to maybe give him an empowering outlet for those feelings and emotions when they came.

One thing my step-mum is slowly realising, she appears to be getting back exactly the same man that came in; the man of his more later years. Two weeks ago a blood clot slice him in two and his brain responded incredibly. And now, two distinct slices of his personality – the genuinely lovely, determined and the humorous, and the anxious and the grumpy – are responding to the challenge. And which balance of those characteristics gain the upper hand may well be the ultimate arbiters to his level of recovery.